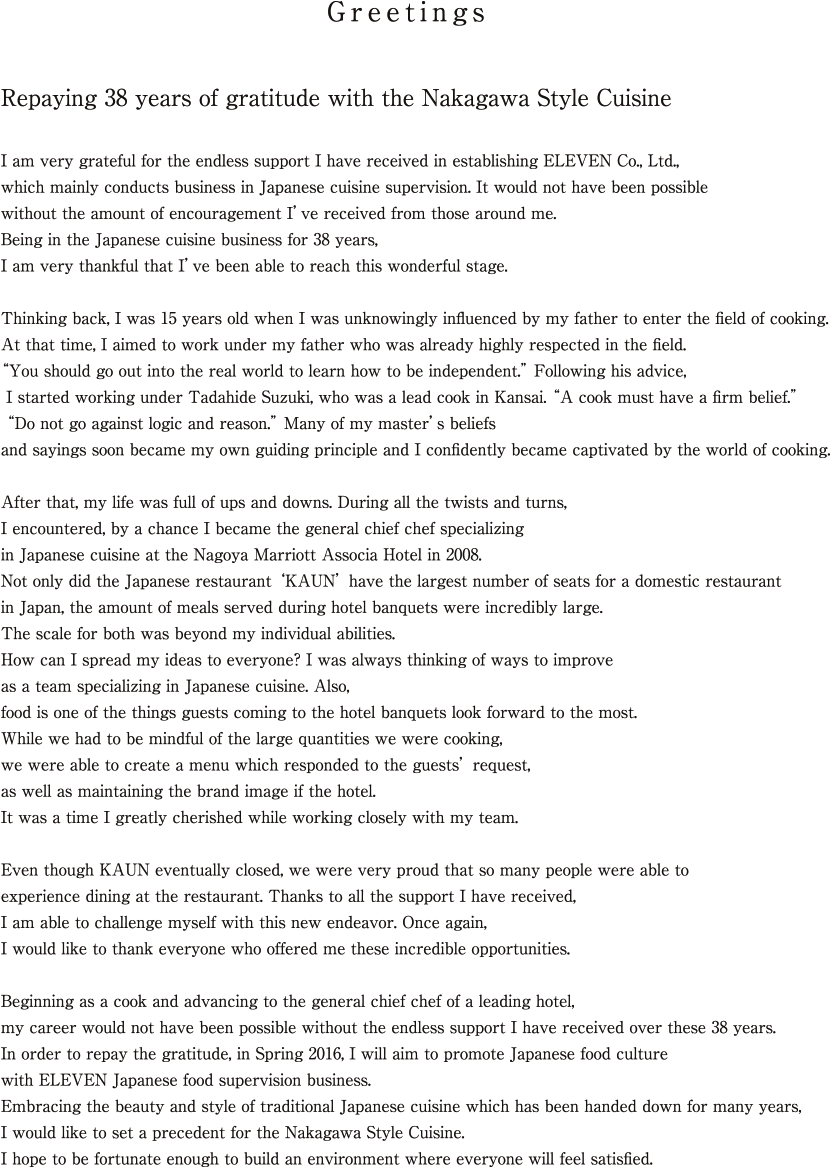 Repaying 38 years of gratitude with the Nakagawa Style Cuisine
I am very grateful for the endless support I have received in establishing ELEVEN Co., Ltd., which mainly conducts business in Japanese cuisine supervision.
It would not have been possible without the amount of encouragement I’ve received from those around me.
Being in the Japanese cuisine business for 38 years, I am very thankful that I’ve been able to reach this wonderful stage.
Thinking back, I was 15 years old when I was unknowingly inﬂuenced by my father to enter the ﬁeld of cooking.
At that time, I aimed to work under my father who was already highly respected in the ﬁeld.
“You should go out into the real world to learn how to be independent.” Following his advice, I started working under Tadahide Suzuki, who was a lead cook in Kansai. “A cook must have a ﬁrm belief.”
“Do not go against logic and reason.” Many of my master’s beliefs and sayings soon became my own guiding principle and I conﬁdently became captivated by the world of cooking.
After that, my life was full of ups and downs. During all the twists and turns, I encountered, by a chance I became the general chief chef specializing in Japanese cuisine at the Nagoya Marriott Associa Hotel in 2008.
Not only did the Japanese restaurant ‘KAUN’ have the largest number of seats for a domestic restaurant in Japan, the amount of meals served during hotel banquets were incredibly large.
The scale for both was beyond my individual abilities.
How can I spread my ideas to everyone? I was always thinking of ways to improve as a team specializing in Japanese cuisine. Also, food is one of the things guests coming to the hotel banquets look forward to the most.
While we had to be mindful of the large quantities we were cooking, we were able to create a menu which responded to the guests’ request, as well as maintaining the brand image if the hotel.
It was a time I greatly cherished while working closely with my team.
Even though KAUN eventually closed, we were very proud that so many people were able to experience dining at the restaurant.
Thanks to all the support I have received, I am able to challenge myself with this new endeavor.
Once again, I would like to thank everyone who offered me these incredible opportunities.
Beginning as a cook and advancing to the general chief chef of a leading hotel, my career would not have been possible without the endless support I have received over these 38 years.
In order to repay the gratitude, in Spring 2016, I will aim to promote Japanese food culture with ELEVEN Japanese food supervision business.
Embracing the beauty and style of traditional Japanese cuisine which has been handed down for many years, I would like to set a precedent for the Nakagawa Style Cuisine.
I hope to be fortunate enough to build an environment where everyone will feel satisﬁed.