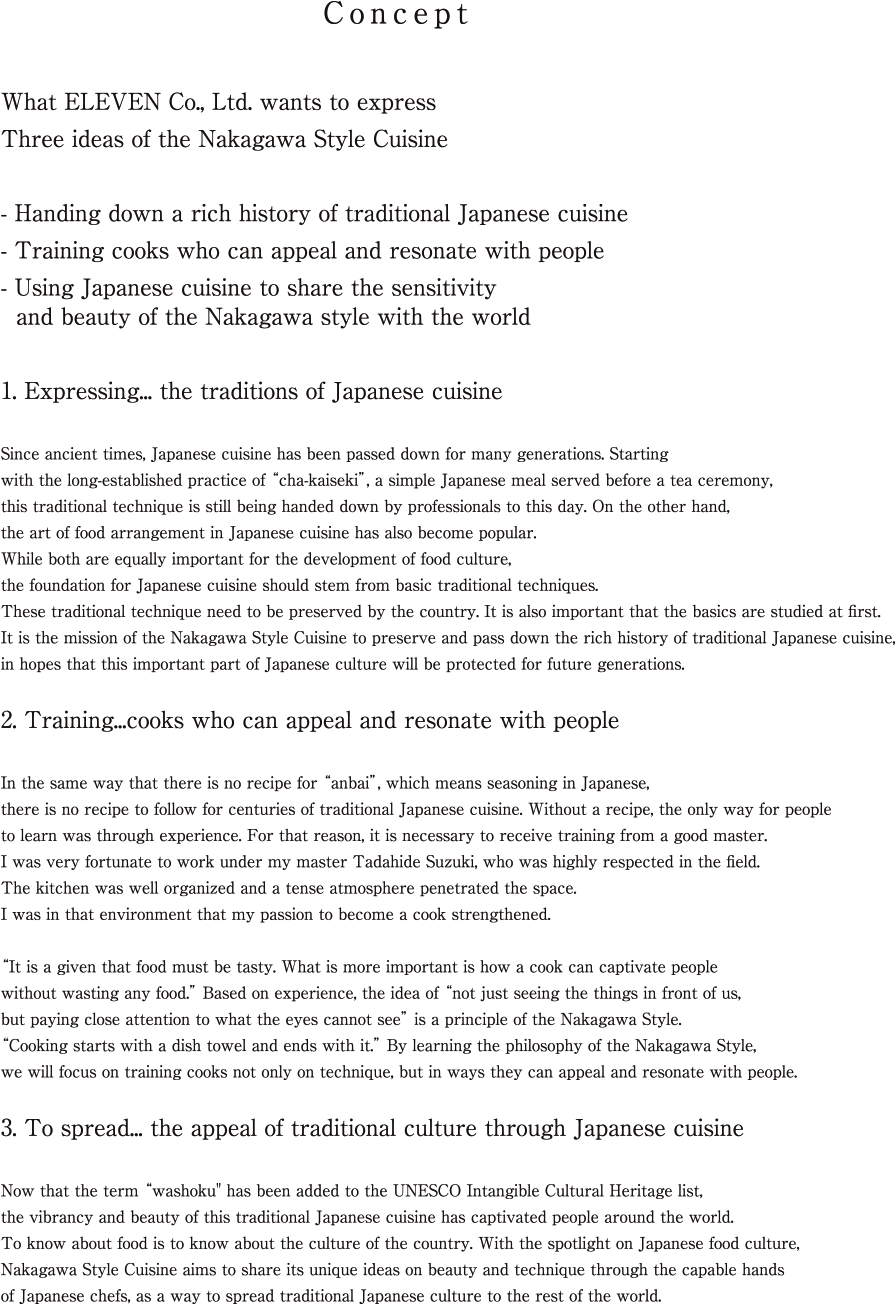 1. Expressing... the traditions of Japanese cuisine
Since ancient times, Japanese cuisine has been passed down for many generations.
Starting with the long-established practice of “cha-kaiseki”, a simple Japanese meal served before a tea ceremony, this traditional technique is still being handed down by professionals to this day. On the other hand, the art of food arrangement in Japanese cuisine has also become popular.
While both are equally important for the development of food culture, the foundation for Japanese cuisine should stem from basic traditional techniques.
These traditional technique need to be preserved by the country. It is also important that the basics are studied at ﬁrst.
It is the mission of the Nakagawa Style Cuisine to preserve and pass down the rich history of traditional Japanese cuisine, in hopes that this important part of Japanese culture will be protected for future generations.
2. Training...cooks who can appeal and resonate with people
In the same way that there is no recipe for “anbai”, which means seasoning in Japanese, there is no recipe to follow for centuries of traditional Japanese cuisine.
Without a recipe, the only way for people to learn was through experience. For that reason, it is necessary to receive training from a good master.
I was very fortunate to work under my master Tadahide Suzuki, who was highly respected in the ﬁeld.
The kitchen was well organized and a tense atmosphere penetrated the space.
I was in that environment that my passion to become a cook strengthened.

“It is a given that food must be tasty. What is more important is how a cook can captivate people without wasting any food.”
Based on experience, the idea of “not just seeing the things in front of us, but paying close attention to what the eyes cannot see” is a principle of the Nakagawa Style.
“Cooking starts with a dish towel and ends with it.”
By learning the philosophy of the Nakagawa Style, we will focus on training cooks not only on technique, but in ways they can appeal and resonate with people.
3. To spread... the appeal of traditional culture through Japanese cuisine
Now that the term “washoku" has been added to the UNESCO Intangible Cultural Heritage list, the vibrancy and beauty of this traditional Japanese cuisine has captivated people around the world.
To know about food is to know about the culture of the country.
With the spotlight on Japanese food culture,Nakagawa Style Cuisine aims to share its unique ideas on beauty and technique through the capable hands of Japanese chefs, as a way to spread traditional Japanese culture to the rest of the world.